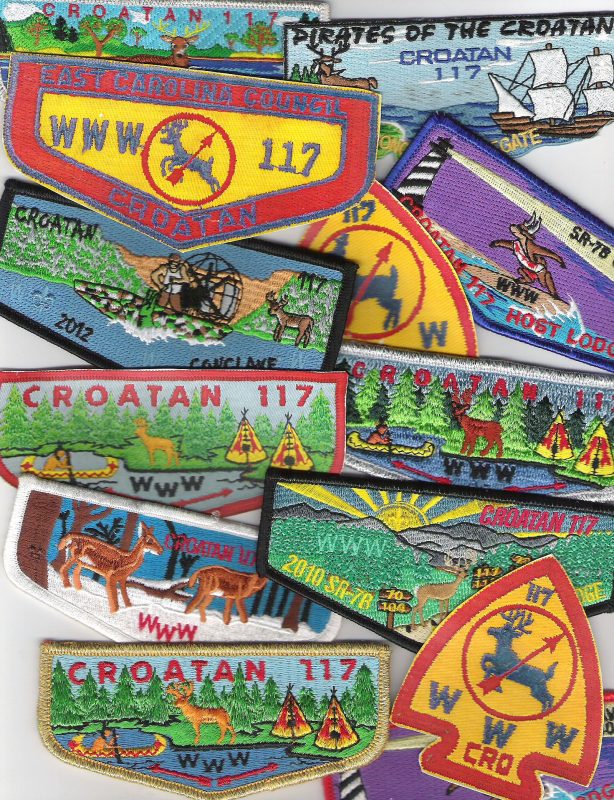 The 1960's saw increased Lodge activity. Woody Harrison, from Wilson, was elected Lodge Chief in 1960. Dick Auger served as the Lodge Staff Adviser from 1960 until 1963. The first Lodge flap was issued in this year with the restriction of one per life. as well. The first Lodge Newsletter, "Smoke Trails", was started. This particular newsletter continued through 1969 when it was replaced by the "Croa-Talk" which has been published since 1970. The Lodge received a trophy for the best display at the 6-A Conference. The First Lodge Banquet was held in 1960.

In 1961 Croatan Lodge hosted its second 6-A Fellowship, this time at Camp Lejeune. The Lodge received the 6-A Honor Lodge Trophy at the Fellowship. Bob Ross, from Kinston, was Lodge Chief. Six members attended the National OA Conference in Bloomington, Indiana. Woody Harrison and Bob Ross led discussion groups at the Conference. This is the first known National Conference attended by Croatan Lodge members. Motions at the Fall Ordeal to construct a Lodge building, and to establish the Chapter Trophy Contest was passed.

Henry Skinner from Wilson was Lodge Chief in 1963. Motions were passed to change the flap design. An Indian Village scene was chosen. The flap was not fully embroidered and the border was only red. El,-ht Delegates from the Lode attended the 1963 National Conference. Tom Pearson served on the Publications Staff at the Conference as a reporter. Tom also represented the Lodge as one of the twenty-four Eagle Scout Arrowmen chosen from across the United States. He served in a special OA Service Troop at the 12th National

Training Conference for Scout Executives, held at the University of Illinois.

Jimmy Wells from Greenville served as Lodge Chief in 1965. At the Fall Fellowship, motions were passed to lift the one per life restriction on the lodge flap. One of the reasons why the restriction was lifted was because the Lodge was trying to raise money to build a Lodge building. Croatan Lodge hosted the Area 6-A Conference at Camp Lejeune in 1965. Tom Pearson served as the Area 6-A Conference Chief. Chick Harvey, from Kinston, was an Area 6A Vice Chief at the Conference. The Conference was highlighted as being the 50th Anniversary of the Order. The Lodge received the 6-A Honor Lodge Trophy at the Fellowship. No members are known to have attended the National Conference in 1965, however members have attended all NOACs since 1967.

Max Whitley from New Bern was Lodge Chief in 1966.

The Chief's Bonnet was passed to Joe Oliver from Snow Hill in 1967. A new fully embroidered red-bordered non-restricted flap was issued. The flap resembled the previous issue. A blue neckerchief with a white border and a fully embroidered Lodge totem sewn onto the cloth was issued during this year. The restriction remained one per life. John Hinnant and Ashbom Whichard attended the 1967 NOAC held in Lincoln, Nebraska. John Hinnant recollected that E. Urner Goodman was on their plane from Chicago to Nebraska. He was telling stories about the early days of the Order to about ten Scouts gathered around him.

The Lodge Chief in 1968 was Jimmy Congleton from Stokes. King

William O'Geary served as the Lodge Staff Adviser until 1971.

The 1969 Lodge Chief was John Kiser from Jacksonville. The Lodge contributed $4,400 in cash, $950 in equipment, and labor estimated at several thousand dollars towards the OA Lodge building at Camp Bonner. Herman Gaskins, John Hinnant, and Danny Pittman drove all night and day in Pittman's car to attend the 1969 National Conference held in Bloomington, Indiana. The national office in 1968 ruled that no Area could hold meetings during a National Conference year. So there was not a 6-A Conference in 1969. However, this rule only lasted one year.

Due to the growth in Scouting,, and the lack of space to accommodate that growth, Camp Charles was over used as a summer camp. A new larger camp, Bonner Scout Reservation, located near Chocowinity opened in 1969 as one of the two Council Camps. Most of the OA activity also moved to Camp Bonner. The first Ordeal at Bonner was held in 1969. Camp Sam Hatcher, near Morehead, was designed as a pioneer and low impact camp. The Camp was in use from 1968 until 1975. The OA held the March Ordeals at camp Sam Hatcher, the first one in 1970. All three camps are still owned and operated by the East Carolina Council, Boy Scouts of America.