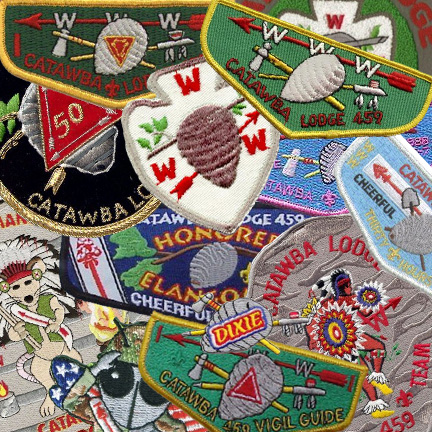 In 1926, a local scouting achievement and honor society was founded at Camp Steere in Mecklenburg County.  Using ceremonies based on Native American ceremonies, the Order of the Pawnee was Mecklenburg Counties Pre-OA Society for the next 25 years.

Although discussion about starting an Order of the Arrow Tribe first started in Mecklenburg County in late 1942, it would take several years for this to happen.  Through the efforts of Fred Vantresse, John Holland, and Gene Grimes, Catawba Lodge #459 was officially chartered on June 18, 1951.  The lodge chose the hornet’s nest as its totem.  The name “Catawba” was selected as it was name of the local Indian Tribes in this region.  The translation of Catawba means “People of the River”.

With the help from the Itibapishe Iti Hollo Lodge #188, Catawba Lodge’s first Ordeal was held in the summer of 1951.  Since its formation, Catawba Lodge has hosted several Conclaves and Dixie Fellowships and has won numerous awards at these events.  In 2015, Catawba Lodge will have the honor of hosting the SR5 Dixie Fellowship at Belk Scout Camp.  This is a significant date as 2015 is the 100 year anniversary of the Order of the Arrow.