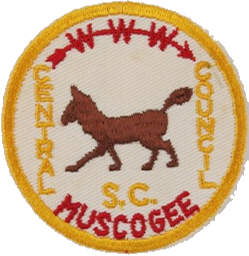 June 15, 1942 marked two beginnings for scouting in central South Carolina. One was the official opening of the new Camp Barstow at its Gaston area location. The other beginning was the chartering of Muscogee Lodge #221. Mr. J. Rucker Newbery, editor of the first OA handbook, and the degree team from Augusta, GA helped to start the lodge and preformed the first ceremonies.

On March 14-16, 1947 Muscogee Lodge hosted the first Area Z Conclave meeting at Camp Barstow. Roscoe Stevens, who was then Scout Executive, was also the Area Z leader that year. This is probably the main reason why Muscogee Lodge was chosen to host this pioneer event. For only three dollars, the brothers of Area Z came together for this historic event.