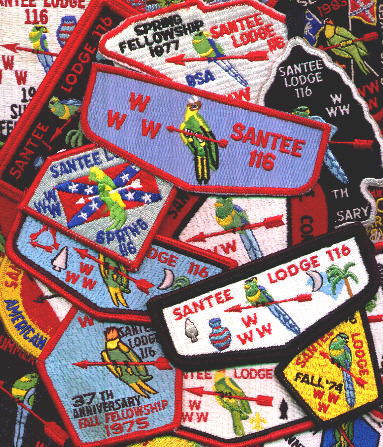 Santee Lodge 116 was chartered in 1938 to the Pee Dee Area Council headquartered in Florence, South Carolina.  It serves eleven counties in the northeastern corner of the state stretching from rural farmland to the popular beaches along the grand strand.  The heart of Santee Lodge is the council's summer camp property Camp Coker just outside of Society Hill, SC in Chesterfield County.  The camp was founded in 1928 and during the life of the lodge much of its service has been centered around promoting, maintaining, and improving this jewel of the sandhills.  The totem of the lodge is the Carolina Parakeet which is an extinct bird that was the only native species of parakeets in North America.  Since 1955 the lodge has featured the bird on all of its memorabilia and lodge members proudly celebrate that heritage.  Over its many years of service Santee Lodge has won many awards including the E. Urner Goodman Camping Award and numerous Dixie Fellowship recognitions.  Although a small lodge compared to many of its neighbors Santee has stood out for the quality of its people and their passion for Scouting.  In fact Rusty Riddle in his book on the history of the Dixie name Santee 116 as the #1 lodge in the section over the first fifty years of the conclave.